Immerse with us in the world of Traditional Portuguese Jewellery,

in its history, customs and uses rooted in Portugal.

Goldsmithery is an ancient art, handed down from generation to generation, of working gold or silver, through techniques such as filigree and granulation. Its manual processes require craftsmen to work with great dexterity and attention to detail, a perfection that requires years of experience and dedication.

Traceable to the Greco-Roman civilization and allegedly brought by the ancient Phoenicians, the filigree and the granulation are rooted in the North of Portugal, namely in Póvoa de Lanhoso, Terra do Ouro. Handed down from generation to generation, filigree and granules are ancient arts of working gold or silver in a 100% handcrafted manufacture.

The origin of this art is not concretely known. It is known, however, that since the Chalcolithic (3rd millennium BC) and in much of the Bronze Age (2nd millennium BC) the technique of hammering and stretching was already used. In the Late Bronze Age (1st millennium BC to 800 BC) they already resorted to casting in sand moulds, which demonstrates knowledge of the technique of welding. Between the Late Bronze Age and the threshold of the Iron Age (600 BC) there is an increase in the knowledge and understanding of metals, metallic alloys and the temperatures required for different processes that allowed the improvement of techniques. With this evolution, two major decoration techniques emerged: granulation and filigree. The thread used for the filigree technique was cut into thin, narrow strips that were later rolled between stone plates.

From the 3rd millennium onwards, a production of works in noble metals resulting from various influences flourished in Portugal. The pieces that appear in this period are massive, with Celtic influence, more precisely bracelets and torques. Examples of these same pieces are the gold torques that were discovered in the Póvoa de Lanhoso Castle, the Castro de Lanhoso. Already with a Mediterranean influence, we have the example of the beads, Arrecadas’ earrings and pendants, decorated using the technique of filigree and granulation. At the end of the Iron Age, the Arrecadas of Laúndos, Carreço and Estela are an example of the splendor of the color and shine of gold.

In the 11th and 12th centuries, in Portugal, there are few references of work in goldsmithery, and, in this period, the pieces of sacred art with filigree decorations predominated. Already in the 14th century, specifically in the second half of the century, the goldsmith’s workshops were installed in urban centers and the goldsmithery returned to assert itself after the gradual liberation from religious hegemony. Until the 15th/16th century, Portuguese jewellery did not have its own character, had no artistic tradition and used elements from other countries, particularly French art. Only in the 16th century, with more resources and ease in obtaining them, did it reach its splendor with strong inspiration from the Manueline style and attract foreign goldsmiths who introduced new techniques, processes and forms. In the 17th century, goldsmithing was technically and aesthetically qualified and marked its transition to the 18th century with the increase in production, mainly due to royal and Church orders. During this period, the use of the filigree technique began to disappear from erudite objects and returned to popular models and uses.

From the 19th century onwards, filigree gained autonomy and importance in Portuguese jewellery, particularly in the two places where the same tradition is still maintained today, in Póvoa de Lanhoso and in Gondomar. The jewellery workshops, particularly in Póvoa de Lanhoso, worked with filigree for a very specific and popular market, such as Viana do Castelo. The city of Viana do Castelo, essentially due to the tradition of festivals, customs and the Mordomas’ Parade, preserved and rooted in Portugal the traditions of the art and the use of the most iconic pieces of jewellery. In their Mordomas’ Parades, under beautiful Minho bride, Mordomas and farmer dresses, they bear their chests with the family’s gold, traditionally the Minhoto’s Hearts (or Viana’s), necklaces of Minhotas’ Beads (or Viana’s beads), Queen Earrings, Arrecadas, Filigree Laces, Libra’s earrings, Malta Crosses, Reliquaries, Gramalheiras, among others.

In the second half of the century, and due to the economic, political and social crisis, the jewellery industry suffered a new shock and the tradition of teaching these crafts was lost. This art, common to several countries in the world and in Portugal to two large cores, differs, although subtly, in the technique of filling the skeleton of the piece with filigree thread, the result of the individual development of the technique by each core.

Currently, there is a rejuvenation of the art of filigree, the result of an increase in demand for filigree jewellery, the modernization of models and the appreciation for the technical craftsmanship and art of filigree and granulation.

The filigree process begins with the weighing of materials for the production of an alloy that, traditionally in Portugal, in gold is the 800 (19.2k) alloy and in silver is 925. This means that the weight of a gold jewelry 19.2 k, 75% represents pure gold (24k) and the rest a joining of silver and copper to make the material workable. These materials are melted at high temperatures, which, after melting, are poured into a long, narrow and smooth surface specific for the process.

The wire bar obtained is stretched to the desired thickness. After stretching the noble material to the thickness of a strand of hair, two thin strands are intertwined with the help of two wooden boards to create a twisted strand for the filigree thread.

A thicker and smoother thread is flattened to build the skeleton of the piece, which is later filled in all its empty spaces with fine filigree threads. At the end of the filigree thread, a small head (called an olhete) is made and the thread is then cut to the size necessary to insert it inside the structure. The process is repeated, with the threads being placed side by side until it is completely filled and held under pressure by these same threads.

The threads, already in the desired thickness, are intertwined together to create a twisted thread. Small balls called granites are also made with the same material.

The smooth plate is then decorated with short lengths of twisted wire and granites to the craftsman’s taste to create an Etruscan jewel, all placed under the plate individually.

Filigree, one of the various techniques of traditional Portuguese goldsmithery, is an ancient art and technique of working the noble materials in a manual manufacture. It’s history, tradition and use are rooted in Portugal, especially in the northern region of the country. The two main areas of this manufacture, Póvoa de Lanhoso and Gondomar, came together in 2017, with the support of the respective municipal councils, to certify the filigree with a single seal, the Filigrana de Portugal. They joined with the purpose of enhancing the ancient and handcrafted technique of filigree, defending the art’s manuality against industrial imitations that discredit it.

The certification of handcrafted filigree allows artisans/goldsmiths to value their art and craft and also the dissemination of filigree as a handcraft technique with a strong and long tradition in Portugal, with its own characteristics that differentiate it from productions from other countries .

Since 2018, all filigree jewellery made according to manual processes, which have largely remained identical for many years, are duly accompanied by the Filigree of Portugal stamp on the jewelry itself and the Filigree of Portugal Certificate (physical) with a unique code for each jewel. In this way, the consumer is presented with a unique and distinct jewel, surely handcrafted through the artisanal production processes that characterize it, preventing the consumer from confusing it with industrial productions.

The Traditional Portuguese Jewellery is rich in its symbologies and customs, full of jewels with hundreds of years, timeless jewels. 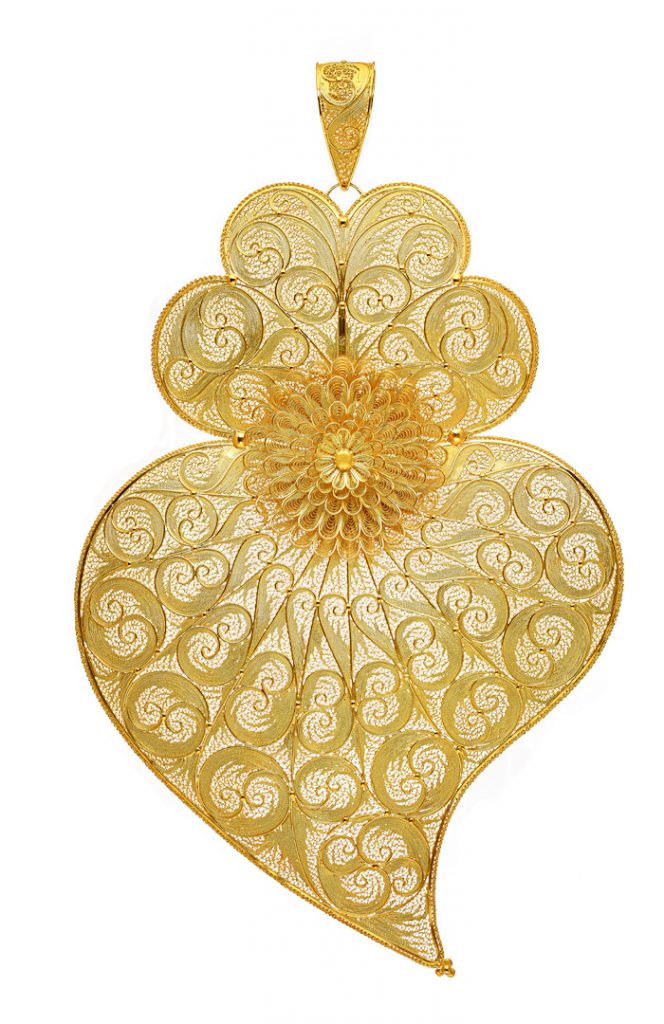 The Minhoto’s Heart, also known as the Viana’s Heart, is one of the most iconic pieces of Traditional Portuguese Jewellery that has become a symbol of Portugal. Its usual name of Viana’s Heart is the result of the tradition of use and festivities such as the Festas da Srª da Agonia in the city of Viana do Castelo, although this is not exclusive to the city or manufactured there.

Its origin is uncertain and often associated with a symbol of love, however, it is believed that it was D. Maria I who had a heart in gold executed in gratitude for the blessing of having been granted a son. It is not, therefore, a symbol of love, but a symbol of dedication and worship of the Sacred Heart of Jesus. Like many other traditional jewels of Portuguese jewellery, this Heart has an enormous religious nature, the lower part being the heart and the upper part the flames representing the intense love and dedication to the Sacred Heart of Jesus.

This symbol of Portugal is one of the most iconic and important Portuguese Traditional Jewellery. Over the years, it begins to be related to profane love, a symbol of the connection between two human beings and its representation can be found in the most varied objects. Keeping the tradition of techniques and design, adaptations of Minhoto’s Heart emerge with a more modern design. 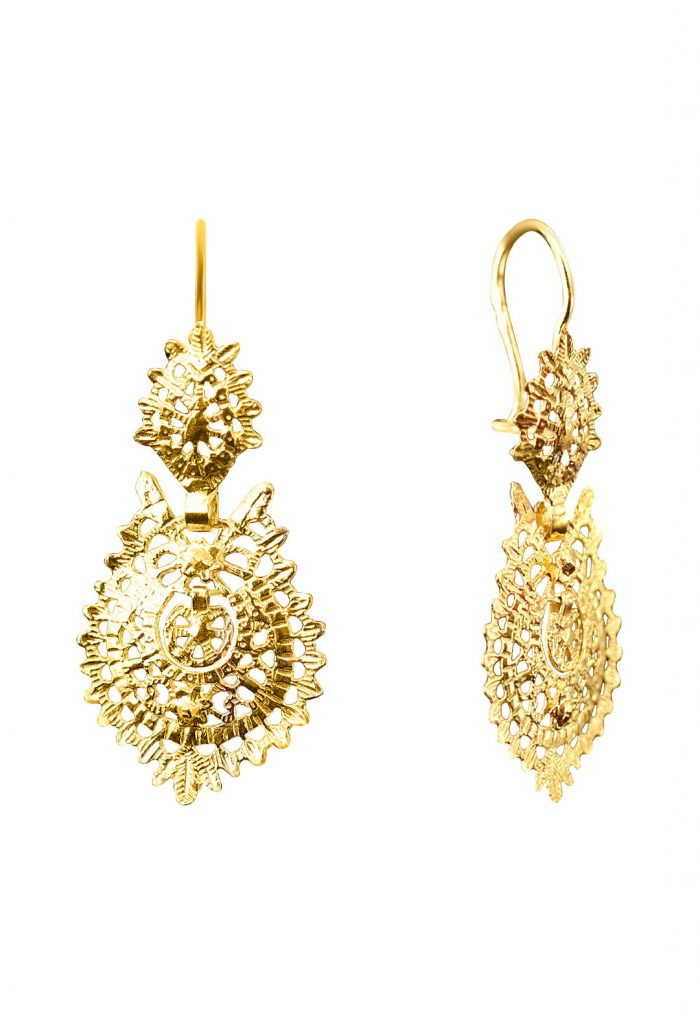 The Queen’s Earrings appear in Portugal during the reign of D. Maria I, Queen of Portugal, however, the name of Queen’s Earring is only given during the reign of D. Maria II. It is almost unanimous that the name Queen’s Earrings originated in Viana do Castelo, when the Queen visited the city and was offered a gold pair. Quickly, this pair of earrings with popular use gained status and symbol of wealth, being, in other areas of Minho, also known as “queen style” earring or “noble woman’s earring”.

This jewel of traditional Portuguese goldsmithery, like many other examples, entails enormous symbology, in particular the female and feminine fertility symbol. The female symbol is present in the triangular shape of the end of the earring and female fertility, also seen as the link between mother and child, is present in the circular centerpiece that is linked, although pendulous, to the piece that surrounds it.

Descendants of the Queen’s Earrings, the Princess’s Earrings have the same symbologies and formats, with the difference that they are made of filigree and not sheet metal. 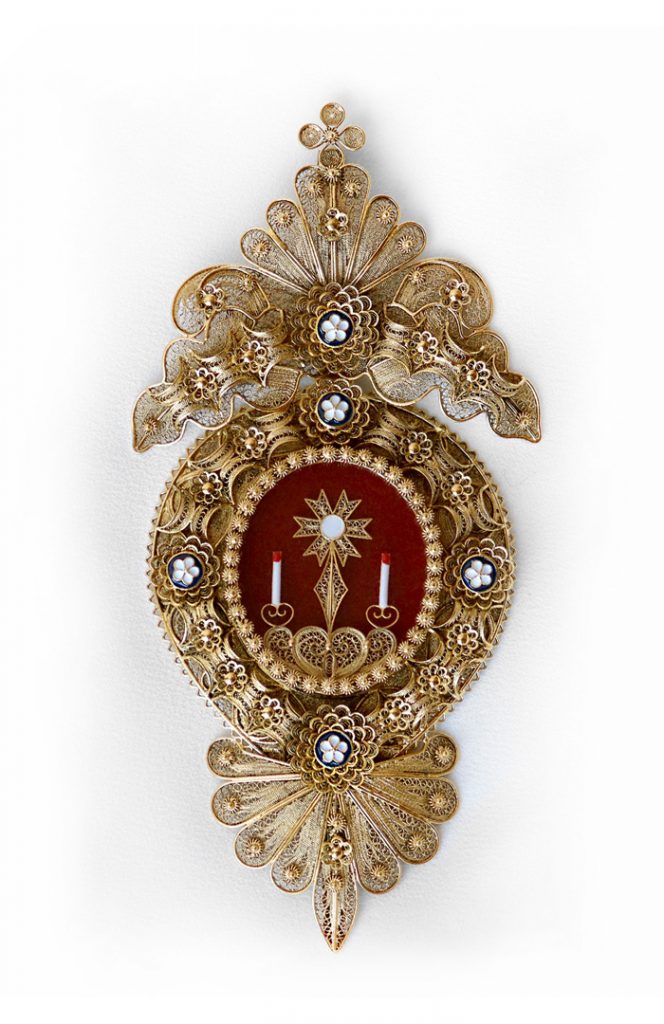 The Reliquary, also known as the Custódia, has a religious influence and is one of the main pieces of Traditional Portuguese Goldsmithery. Presumably descendants of the Roman Reliquaries, they persist today in various forms and models. Among them, the reliquaries in filigree, in plate, with the use of enamel or the use of turquoise stones, the most traditional includes the symbology of the martyrdom of Christ around the central element.

Similar to the Queen’s Earrings, the Reliquaries are also a symbol of female fertility due to the use of the inverted triangle, a female symbol already used at the time. 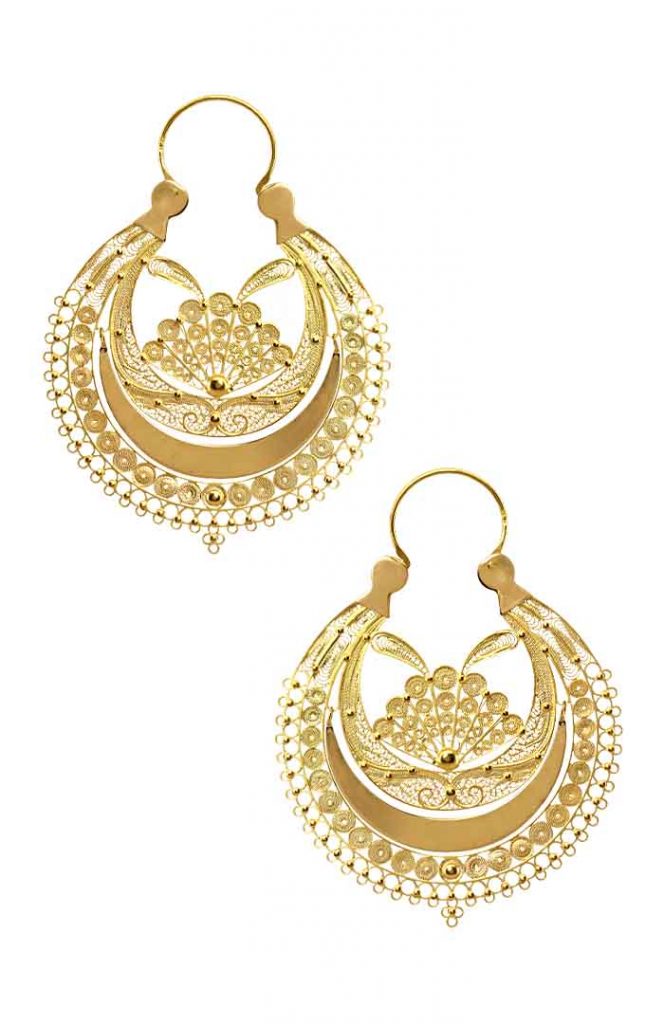 The Arrecadas, also known as Bambolinas, entail enormous symbology in the various elements that compose it. Descendants of archaic fortified Arrecadas, such as the Arrecadas de Laúndos, Arrecadas de Estela and others, found in fortified places from the 2nd Bronze Age, they maintain several common characteristics of Hellenic influence.

In between horseshoe shape of the hook that goes through the ear is an amulet, symbol of luck.

The lunular shape present in the open and central element of the Arrecadas and, also, in the suspended element present in this opening, the so-called bambolina, are a symbol of protection, the astral amulet that keeps away evil spirits.

The triangular shape at the end of the Arrecada is a representation of a bunch of grapes, a symbol of fertility. This feminine symbol is present in almost all old earrings, such as the Reliquary and the Queen’s Earrings.